Sho Kunin is one of the male students attending Akademi High in Yandere Simulator.

Made national news earlier this year when he defended a woman who was being mugged by a group of three men, and carried her to a hospital afterwards.
Currently regarded as Budo's most promising disciple.

Sho has short dark brown hair that spikes up at the front. His eyes are light brown. He wears the default uniform unless customized, and a white headband with Japanese writing if the Martial Arts Club is active.

As of the February 19th 2019 Build, Sho has light brown hair, blue eyes and paler skin.

Sho is Heroic. He will give a suspicious look before crossing his arms if a camera is pointed at his face. If he witnesses murder, he will try to apprehend the player, which results in the struggle minigame. If he wins, the player will get the APPREHENDED Game Over. If he loses, the player will stab him in the forehead, killing him. 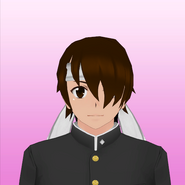 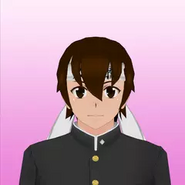 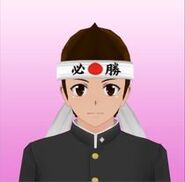 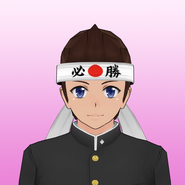