Trusted to operate the Cooking Club when the leader of the club is not present. A connoisseur of good food, with a very discerning palate. Dreams of becoming a world-famous 5-star chef.

Shoku Tsubaraya is a male student who attends Akademi High in Yandere Simulator.

He has semi-long, curly, dark brown hair, the fringes on the sides nearly extending to his chin. He also has a long, curly cowlick extending from the part in his hair. His eyes are bright green. He wears the default uniform unless customized by the player. He also wears a light yellow kerchief and apron. If the Cooking Club disbands, he will no longer wear his kerchief and apron. Due to currently being the substitute leader, he wears the red armband of leadership on his left arm.

Shoku is a Social Butterfly. He will strike a cute pose if a camera is pointed at him. If he witnesses murder, he will run to a heavily populated area and call the police. 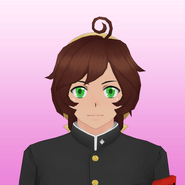