A foreigner boy who used to live from America along with his family, became a new student in Akademi last year. At first, after some students act hostile and rude towards him, he felt hopeless of having new friends until Kokona and Saki befriends him, when they saw him sad and alone. Saki soon began to develop a crush on him and has a feelings for him. As a result, Simon also developed a romantic relationship with Saki and also shares a feeling for her as well.

For now, since this boy knows your true nature, you better be careful around him. I know he's going to do everything to expose your crimes and you can't also beat him in fight. Never forget that he is your main enemy...for now.

Bloodshed, Ayano, violence, being harassed, any of his friends in danger, his sister's bad temper, video games, drama, delinquents, arrogance

A foreigner boy who used to live from America along with his family, became a new student in Akademi last year. At first, after some students act hostile and rude towards him, he felt hopeless of having new friends until Kokona and Saki befriends him, when they saw him sad and alone. Saki soon began to develop a crush on him and has a feelings for him. As a result, Simon also developed a romantic relationship with Saki and also shares a feeling for her as well.

For now, since this boy knows your true nature, you better be careful around him. I know he's going to do everything to expose your crimes and you can't also beat him in fight. Never forget that he is your main enemy...for now.

Simon has a fair skin and slender. He wears a white shirt and bright green tie with a bright green-lined black blazer worn over, with black slacks and brown shoes.

In his previous appearance, he wears blue glasses. He has black eyes and grey hair.

In his new appearance, his eyes are now dark green and his hair is dark yellow. His glasses is green.

When attending to his club, Simon wears a green cape in his back and green bandana around his head. If his club got disbanded, he will no longer wear his cape and bandana.

Simon is very friendly, nice, helpful and sometimes solitude. He was very quiet when he is seemingly unable to make friends at first, until Kokona and Saki approached and befriended him after seeing him lonely and alone. As a result, he becomes a bit more sociable. He is very brave and smart. He seems to be very calm when anyone tries to intimidate or harass him and he always wins the conflict. He does not also tolerate people being disrespectful to anyone else for no reason. If he had seen any student being bullied, he would go and defend them from their harassment.

One year later, ever since the aftermath of Akademi High School massacre, Simon becomes slightly more protective to Saki and Kokona, fearing that Ayano might also try to kill them at anytime soon. He strongly cares for his two-long friends so he doesn't want to let anything bad happen to them.

In Original Mode, he has Heroic Loner Persona since he had learned the combat skils in martial arts making him very capable of fighting anyone who is a threat. In Future Mode, he currently still retains the same persona. If he witnesses Ayano committing murder, he will run towards her and apprehend her without entering mini-game struggle. Simon will give a suspicious look, if Ayano aims a camera on him. Similar to Raibaru Fumetsu, he cannot be killed with stealth because he has now the ability to sense someone behind him or with frontal attack because he will quickly grab Ayano's arm strongly or block her attack with his right arm (if non-sharp weapon is used against Simon) and disarms her and then pinning her on the ground. If Ayano also tries to kill Simon while Robot-chan is near her creator, Robot-chan will quickly grab and restrain Ayano before she could kill Simon. Ayano cannot interact with Simon since he became aware of Ayano's true nature and would avoid her by refusing to talk to her.

If a student who had befriended Simon, witnesses Ayano committing murder, they would run to him and tell him about it and he will proceed to apprehend Ayano and restrain her. Some befriended students will tell Simon to leave the school with them for safety but he would refuse it as he knows he can stop and fight the murderer.

At 7:00 AM, Simon enters the school grounds by the Entrance/Exit Gate 1. He walks to his locker at 7:05 AM and changes from his outdoor shoes into his indoor shoes at the lockers. At 7:15 AM, he walks to the Martial Arts Club on the second floor and watches his apprentices spar. He also goes to the random location that has a spacious area with the rest of the Martial Arts Club members and watches his apprentices spar there as well.

Simon walks back to class again at 1:30 PM and participates in cleaning time between 3:30 PM and 4:00 PM. Afterward, he heads to the Martial Arts Club and stays there until the end of the day. He practices kicking with the other members and training them for new moves from 5:00 PM to 6:00 PM.

If the Martial Arts Club gets disbanded, he will sit alone at the audience sits near the football field and reads his book or socialize with Saki and Kokona (if both of their clubs are disbanded as well) about the cause of disband of their club during 7:15 AM and 4:00 PM.

Saki is one of two Simon's close friends. At some point, she developed a crush on Simon and began to have a romantic relationship together. After the incident at Akademi High, Simon becomes more protective to Saki, fearing her safety with Ayano still being in the same school.

Kokona is one of two Simon's close friends. Like Saki, Simon cares for her and would protect her from danger.

Simon met Himari in thrice times in 2020. She does not know much about him yet in that time.

One year later, Himari unexpectedly reunites with him and feels relieved that Simon wasn't been added in Akademi High's victims list after all. Because of recent terrible incident at their school, Himari refuses to let Simon risk his life due to her fear of losing him too. Simon never declines her help when he knows he's having trouble or problems.

If Saki dies, Simon may become Himari's suitor because she will also eventually develop a crush on him. He will have a crush on her as well.

Yui is Simon's friend and favorite apprentice in his club. He was introduced to her by Saki at Buraza Town near the Maid Cafe where he quickly became friends with Yui and other Rainbow Six girls. Yui likes Simon and when she witnessed him having defeated the delinquents who bullied a student, she admires him of his skills that made her decide to join his club.

Kanan is Simon's sister. Due to his younger sister's hot-tempered nature, Simon is always nervous around her and uncertain if he could talk to her and would avoid her because she easily gets mad at him when he makes a mistake and doesn't want to take the chance of ending up angering her since childhood. If he was to force himself to spend time with Kanan depending on what situation, he tries to be careful not to wrong her and hardly tries to choose words carefully but it always fails.

When Kanan's behavior eventually had took too far and becoming worse, Simon is finally fed up and finally confronts her about her treatment towards him. If Kanan wouldn't stop mistreating him, a hurt Simon sternly decides not to talk to her anymore, to his sister's heartbreak and guilt. This caused the two to have a strained relationship between each other. Kanan made attempts to apologize to her brother, but Simon completely refuses to believe that she is sorry at all so he rejected her apology. Simon soon starts to regret rejecting his sister but still unable to bring himself to forgive for her mistreatment.

At first, Simon was unaware of her true nature until she attacked the Akademi High and its population.

After the incident at Akademi High, along with Saki and Kokona, he desperately wanted to bring Ayano to justice for her crimes. He felt angry to see Ayano gotten away with murder and really wants to see her thrown in prison for her villainous actions.

He felt uneasy after learning that she stills enroll the same school and still she had gotten away with murder. When Ayano finally noticed him and his two friends were still alive, she decides to let them live for now but leaves them with a warning by threatening to kill the trio if she ever learns that they manage to have evidence that connects her to the crimes, attempting to get her exposed and arrested. Though, that still not stops him. He really has a strong sense of justice against Ayano because he cannot forget of her actions she did against the school.

Simon built Robot-chan as his own invention for science invention contest in Akademi High School, since he's being qualified to. Robot-chan is also been programmed to protect Simon, his two close friends or other innocent people who are seemingly in danger. Because of that, she does not like seeing someone attempting to harm his creator and would immediately go stop them.

On the other hand, Simon also used her in martial arts club as a trainer of showing martial arts movements to his clubmates to learn how people do them.

It is shown that Robot-chan loves her creator and is kinda close to him. She never really fails him.

Budo was Simon's late former mentor last year, who was one of the students got killed in massacre at Akademi High School by Ayano.

After seeing Budo performing techniques that he had learned so far, Simon became inspired to have combat movements like him, which made him feel interested enough to join the Martial Arts Club. During the club meeting, Simon was noticed by Budo feeling sad and hopeless. He confessed to Budo that he was worried that he might never graduate the school due to constantly having poor grades of his academic performance. But he was encouraged by Budo to never give up and keep trying until he gets better and better. Simon realizes this and feels that the leader is right.

One year later, Simon mourns his death because he knows the fact that Ayano killed everyone in Akademi High School, it would include him. He promised Budo that he will make him proud and he will taking his place for him to teach the students who will become interested to learn martial arts.

Simon is weak and incapable to fight at first, but he eventually becomes stronger when joined the Martial Arts club. He has developed a powerful physique, and undeniable skill that would allow him to defeat almost everyone that are threats to him or anyone. His strength is very powerful as Raibaru Fumetsu.

Simon also has four different types of fighting style that he has learned and ability to perform heat actions he gained from martial arts: 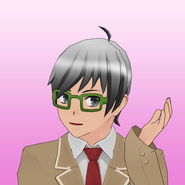 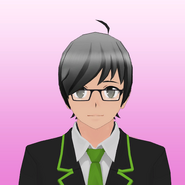 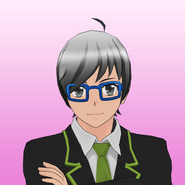 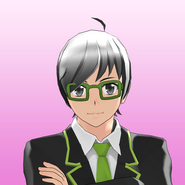 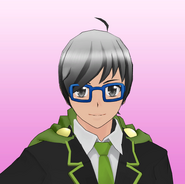 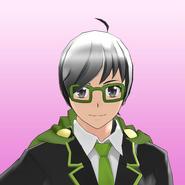 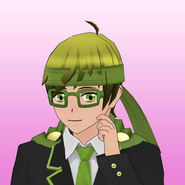 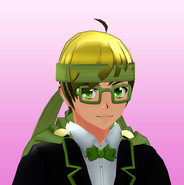 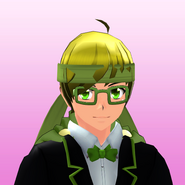 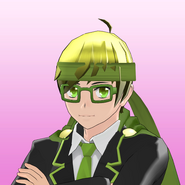 Simon without his cape.