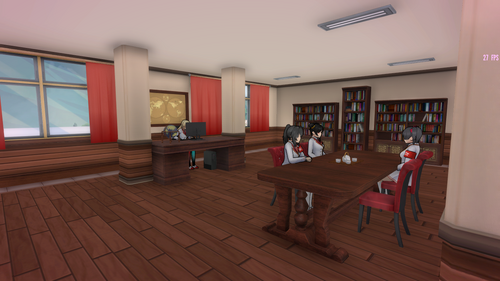 The Student Council are the disciplinarian students in Akademi High School. Their main job is to keep and ensure everything in their school maintain peace. If they see a fight, they will run up and stop the fight between them. This is a special club that can't be disbanded even if any member is kidnapped, goes missing or murdered.

The Student Council is a group of elected and volunteer students working together with an adult advisor within the framework of a constitution or bylaws to provide a means for student expression and assistance in school affairs and activities, give opportunities for student experience in leadership and encourage student, faculty and community relations.

Kiyoko Tatsuhara is the president of the Student Council. She is the previous public relations director last year and the only original member. In the aftermath of massacre at Akademi High School, she was recognized to be a remaining student last year and a original council member so the new faculty made the decision to promote her as a student council president. While Kiyoko did accept the outcome that she is in the role of being council president, she isn't happy that her friends who all used to be her council mates are dead. Because of that, her mood isn't like last year and usually appears in a depressed look because she can't resist from thinking about her late friends.

Kayano Sukado is the vice president of the Student Council. She is Kei and Shiori's best and close friend.

Kei Takahashi is the treasurer of the Student Council. She is Shiori and Kayano's best and close friend. Because of her experience about having some people in the world are suffering due to lack of money that disallows them from continuing on with their lives, Kei learns to manage money and conserving them. She knows that she should only use the money wisely if there are important things she needs to purchase. Perhaps, this is the case that fits her to be the Student Council's treasurer.

Kurumi Nishimura is the secretary of the Student Council.

Shiori Aikawa is the enforcer of the Student Council. She is Kei and Kayano's best and close friend. She is known to be very capable of maintaining peace by preventing people from having arguments, physical fights or bullying others. She is very friendly and kind but she will get serious if she sees a confrontation. This may be the reason why the president had promoted her as a council enforcer. Unlike the Akademi's past enforcer, Shiori doesn't think using intimidation is the better way to stop the student from misbehaving but instead she will politely leave them with a friendly warning if a student is behaving disruptively again. If a misbehaving student would think she is only bluffing at them, then they aren't aware that she is serious and really means it.

Ayano Aishi is the current public relations director of the Student Council. Due to seeing her being a best person and fit for the job, she is appointed by Kiyoko, unaware that she is the culprit behind the Akademi High School massacre. This dismayed Simon, Saki and Kokona because they don't approve the fact of appointing a person who has committed crimes and get away with it.

Megami Saikou was the president of the Student Council and heiress to the Saikou Corp. She strives for excellence in all things. She settles for nothing less than the best, so has put together a student council comprised of the most elite students in school. Megami had a reason to believe that there is "a dangerous person" on school grounds, so she has warned the Student Council to be extremely cautious over the next 10 weeks, and has authorized them to carry pepper spray on school grounds. Her warning has resulted the Student Council to be much more alert than other students, and would bust out a can of pepper spray at the slightest sign that their lives may be in danger.

Kuroko Kamenaga was the vice president of the Student Council. She was also the school's previous student council president. She was defeated by Megami in the most recent student council election. However, she was acknowledged to be the second-best person for the job, and offered her the role of vice president, so she accepted the offer. While Megami is absent from school, Kuroko is in charge of Megami's presidential duties. In short, Kuroko fills the role of student council president while Megami is gone. She is known for being formal at all times, which is reflected in the way she stands, walks and speaks. On the other hand, Kuroko seems to resent Megami for winning the election for president against her. Most of many students don't really like her due to her harsh behavior caused others to feel offended and afraid of her when she disciplines them for misbehaving.

Shiromi Torayoshi was the treasurer of the Student Council. She is a peculiar young woman whose intentions are never clear. She is known for smiling at almost every hour of the day, in every type of situation. Because of that, most of other students find her weird and unsettling.

Aoi Ryugoku was the enforcer of the Student Council. Because of her being a very physically imposing person, Megami chose her for this position. She is also been known to take her job a little too seriously. She is almost similar to the delinquents due to being tough, but she is actually friendly to those who are innocently nice.

Kiyoko Tatsuhura is the former public relations director of the Student Council. She is a hot-blooded young woman with a burning passion at all times, and be the physical embodiment of guts and determination. There are not much details why Megami chose to include her in the Student Council.