Known for taking naps and eating snacks in class. Lazy and flaky, but not a bad person.

Best friends with Rojasu Norubiru, and shares many personality traits with him - including being fiercely protective of his friends.

Sukubi has messy brown hair with uneven bangs and pieces sticking out on both sides. His eyes are orange. He wears the default uniform unless customized, along with a blue and yellow collar with a golden lock in the middle and a camera around his neck.

Sukubi is a Sleuth. When the atmosphere is above 80%, he will act on the Social Butterfly persona upon witnessing murder or discovering a corpse. He will do a cute pose if a camera is pointed at him. However, if the atmosphere is below 80%, he will act upon the Phone Addict persona instead. He will give a suspicious look if a camera is pointed at his face. 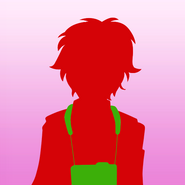 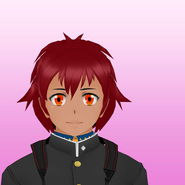 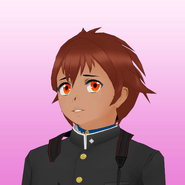 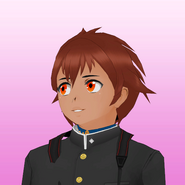