This is the fanon version of Phantom Girl, created and owned by CutyCat.

This girl was Ryoba's first rival. She got killed in the girl's bathroom, second floor.

Base byy Ptysia112, hair by Gelangweilt and eyes by Ian Rookie.

Yakabe had short orange hair and round light brown eyes. She also had a fringe. She wore the default female blazer of her school with short white socks. She was one of the female students attending Akademi High School in the 1980's years, and she appeared in week 0. She was also a rival of Ryoba Aishi, and got killed by her in the girl's bathroom.

She got killed by Ryoba during cleaning time. She got stabbed by her two times in the chest. Now, she haunts the bathroom, unable to leave peacefully after she got killed, and every second friday of April, she hunts the entire school, searching for a member of the Aishi family, constantly searching for revenge. You are able to see her if you take a picture on the girl's bathrrom on the second floor, when the light is off.

Yakabe was rather shy but caring and kind person. She was almost like Amai's mother, and she had a really high sense of justice. She couldn't allow any violence. She was also naive, not believing what Ayashi said about the fact that Ryoba was murderous and had a grudge against her and any other girl that liked her senpai.

Her old crush. She was planning to confess to him underneath the cherry tree. If she learn his death, she will imediately search for Ryoba and make her life a living hell, since she would think that he couldn't die if he was with her instead of being with Ryoba.

She have a grudge against her, and want to take revenge on her or any Aishi family member, since she learned that the Aishi bloodline is dangerous and murderous.

Yakabe really liked Yumiki. Some pretend that Yakabe had a crush on her, but this rumor was false.

Ayashi had told Yakabe that Ryoba was dangerous, but Yakabe didn't believed her, as she thought she was lying. But now, she knows that all of this is true, and she regret not listening to Ayashi. 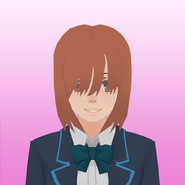 Portrait of her when she was alive.
Community content is available under CC-BY-SA unless otherwise noted.
Advertisement