Claims to be wearing a medical eyepatch to correct a problem with her vision.

Refuses to provide details regarding her eye condition, leading to rumors that she is lying about the reason she wears an eyepatch.

The first week of gameplay

Supana Churu is a female student who attends Akademi High in Yandere Simulator.

Supana has twisted, blackish-purple hair in pigtails, with skull clips holding them. She has a shadow on the top half of her face. She wears a white eyepatch over her right eye. Her left eye is deep purple. She wears the default uniform unless customized by the player, and a moon choker representing her place in the Occult Club. If the Occult Club disbands, she will no longer wear the choker.

In older builds, she had dark blue, or "bruise-colored" hair. As of the November 11th, 2019 build, the occult club members have their respective hair colors instead of them being identical.

Supana is a Coward. If a camera is pointed at her, she will hide her face. If she witnesses murder, she will beg to be spared in exchange for her silence. If she is spared, she will run home, but she will not call the police. She cannot participate in physical fights against the player. 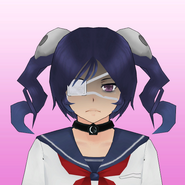