Bullied by boys throughout her life, she gradually began to feel that girls have to stick together to stay safe from predatory boys. With this in mind, she formed a gang with other female victims of bullying.

Tiru Sutoriku, previously known as Teal Streak, was a female student and delinquent attending Akademi High in Yandere Simulator. Before she was reintroduced in 1980s Mode, she lived in Ayano's timeline.

Tiru has dark brown hair, about shoulder length. Her bangs are dyed teal, and are long enough to cover her left eye. Her eyes are teal to match the streak in her hair. She also has a larger bust size than the other delinquents. She wears a red surgical mask over her nose and mouth with the female symbol on it. She wears the original uniform unless customized by the player, except with a long skirt that reaches her ankles. Tiru also wears a case on her back, which contains a shinai.

Tiru has the Violent persona. She is passive for the most part, but if provoked, she will not hesitate to defend herself. If the player bumps into her 5 times in a row or tries to attack her with a weapon, she will take that as Ayano trying to fight her, and the combat minigame will start. If she witnesses Ayano kill someone or carrying a corpse, she will take out her weapon and fight her. She will not stop attacking the player until they either kill her or she knocks them out.

As of October 10th, 2021, Tiru was reimplemented and now has an official routine. She and her gals hang out in the west third-floor girl's bathroom every morning. At lunch, she eats her bento on the pink bench near the incinerator. Unlike most students, she does not participate in cleaning time, as she will also use this time to chat with her friends in the bathroom.

Before the 1980s mode's release, Tiru did not have a "real routine" and was not considered a real character. Instead, she and the rest of her gang would stand with their weapons beside the incinerator. They do not move unless they witness murder, or if they see the player holding a weapon. When she is not present, there would be a timer. When the timer runs out, she would magically appear along with the rest of the delinquents. 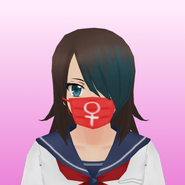 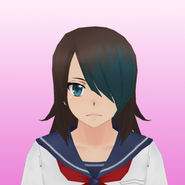 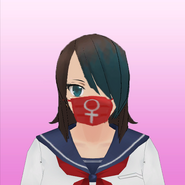 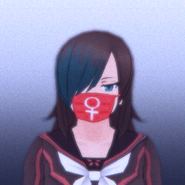 Tiru's in-game appearance before she was removed.
Community content is available under CC-BY-SA unless otherwise noted.
Advertisement