Triangle Pompadour is a male delinquent.As of the Delinquent Update he has been removed, however, he might be re-implemented in a future game mode, 1980's mode.

Triangle has a pompadour hairstyle that is shaped like a triangle. He has gray eyes and he has a custom face, much like the male occult members, to make him look angrier. He holds a shinai over his right shoulder and will use it to hit the player if they are seen as a threat. 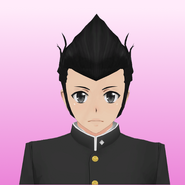 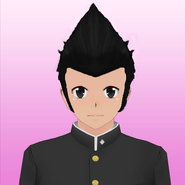 Another fan-made portrait
Community content is available under CC-BY-SA unless otherwise noted.
Advertisement