This is the fanon version of Yandere-chan's Father, created and owned by CutyCat.

I can't seem to get any info for him..but, that white girl spawned on my screen to tell me this :

YOU MUST KNOW WHO I AM, RIGHT ? I'M DEEPLY SORRY, BUT I CAN'T LET YOU SEARCH FOR HIS INFO. NOT...RIGHT NOW. LATER. FOR THE MOMENT, LET'S GET TO KNOW EACH OTHER ! HEHE~

Eyes and base by Ptysia112, uniform by Pumpkinhero2. Scar by me.

Tagetorā had short dark grey hair and dark grey eyes, along with a scar on his left eye. It is unknow how he gained it, tho it is assumed he gained it during a fight, but it's unknow with who. He also wear the default male uniform of the 1980's years. He is the father of Ayano Aishi, Taiko Aishi and Yamato Aishi, and he is the husband of Ryoba Aishi.

"One tragic day, Tagetorā died. It was the following day of the birthday of his wife. When he was out with his wife (he wanted to surprise her despite the fact that he was a little scared of her), when his wife was hiding her eyes, he got shot two time in his chest by an unknow murderer. Ryoba, with her eyes closed, couldn't see who shot her beloved husband. She immediately opened her eyes when she heard the shot, but it was too late. The murderer already ran away. And Tagetora was already...dead.

I promise you. We will find him. Together. And destroy him."

As Info-kun explained, Tagetorā got shot in his chest two times by an unknow killer. It is unknow if the culprit had a grudge on him, or if he just killed him for fun.

Tagetorā used to be a Loner. When a camera was pointed at him, he would just stand there and have no reaction at all. If he would have witnessed any murder when he was in high school, he would have told Ryoba to step away from him, that she is a monster, and that would immediately give Ryoba a Game Over. Same if he witness Ryoba acting crazy, holding a weapon, dragging a dead corpse or if she is bloody. He rejected all the girls that had confessed to him, exept for Ryoba.

"Tagetorā was a very nice and kind person. He had an average life ; average grades, average looks...maybe it was what made him so special that a lot of girls had a crush on him ? Curiosly, he kinda looks like your Senpai..."

His wife. Althought he was scared of her because of her moods swing, he still loved her a lot as she was the only girl who never ever let him down and who never left him for whatever reason.

His oldest daughter. He is aware that she lives with an incurable condition that leaves her without feelings, but he thought all of this was fake since she always was able to express emotions easily. Even thought, he didn't had a lot of time for her and regret not being able to spend more time with her. He loves her a lot.

His oldest and only son. He was relieved when he learned he didn't suffer from the incurable condition his sister had, but he realised that he was a lot more shy and introvert than anyone else. Even after all that, he still consider him as his son and loves him more than anything.

He also loves her a lot, and hope the best for her. 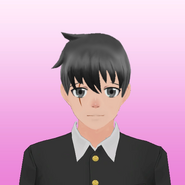 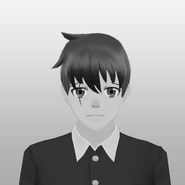