He is seen around various places at Buraza town buying lewd objects. His mother and seven year old sister died in a car crash. He lives with his dad's new wife and her daughter.

Yorozuya has short light black hair that has one strand of hair between his eyes and an ahoge on the top. He also has cyan eyes and he has a black jacket with two underclothing. The first is black and the second is gray.

He loves him, and wants to do some lovemaking with him. He is his boyfriend and they are currently dating.

Yorozuya kissed him twice. He is Yorozuya's former crush.

He is friends with her. He is unaware that she has a crush on him.

They both showered in the locker room together. Nothing other than that. It was awkward.

His friend. He helps him try to be happy and sociable.

He will naturally befriend her if he does not witness her harass or cause violence to someone. Because he says that he's the only one who does that.

He kissed Taro once just for fun and almost got killed by Ayano for it.

His dad fell in love with her mom and they got married. She is his step-sister.

Basically friends with him.

On June 3, A baby boy was born from Sayaki Korekara (Yorozuya's mother) named Yorozuya. When Yorozuya was growing up he discovered porn he was six, on his iPad. He kept watching it until his mom found out about it and put certain restriction on his iPad. When Yorozuya was fifteen, his mother had died in a car crash along with his sister. Three months later, his father married a woman named Sani Purutiku. (Sukina's mom) And Yorozuya and Sukina become step-siblings. When Sukina, was getting into her yaoi "phase" which never ended, Yorozuya had found her eroge manga and was disgusted by it at first but soon became interested and started getting into it as well. (p.s. Sukina eventually DID get out of her yaoi phase)

The topics that Yorozuya likes and dislikes are as follow: 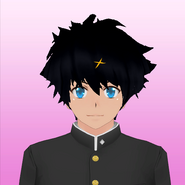 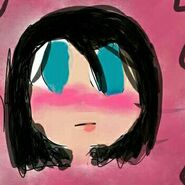 Do you really need to know?

Well, first, there is my dead mother and sister and my egoistic father who is unfortunately still alive. ^^

I am a student at Akademi High, obviously. Do you even know who I am?

It's math without a doubt.

I'm in the drama club with Kizana.

I don't have one.

I can sometimes fail at supporting someone...

When I sustained a turtle that was once crossing the road.

Flirting is my hobby and my obsession is Syaoran.

Wasp crackers are the most disgusting food. Yes, they’re crackers. With wasps in them.

The only thing i want is for my mom and sister to come back to me.

I would if I actually saw one.

I play the guitar.

W-well, I can't because she's d-dead. But either way, I wouldn't want to fight with her.

Well, I don't have a lot of friends exactly.

I cook well! But I can't cook a croissant.

I'm not sure about that yet.

I am confident in my ability to concentrate.

Stop eating junk food is all I can say. You're on your own pal!

I accidentally made Syaoran cry.

Wait, our school has an anthem?

The flowers on a lily pad.

I don't have one.

For some reason I think of a bunny.

The winter is coming....I will feel like a pilgrim now.

To the assassination of JFK to stop it from ever happening.

I read yaoi manga because it's fun.

That I go into the shower rooms most of the time.

I haven't measured yet.

I'm capable of being class president of positive town.

No, but I have asked about everyone out!

Just like Kizana's routine, but going into the shower room.

Pocky and my phone.

Western all the way.

Check if I got any texts.

In a shoji type of house.

It's pretty nice and very comfy

I got a new manga and if I didn't mention then I also got a boyfriend!

My mom and sister died...

I love them a lot!

I can see pretty far.

Well, I guess that's just being a student

I study for a while, but just not too long since it's so BOOORRRIIINNNGGG.

I don't know. I guess friends I can trust with secret information I can rely on.

A otocyon. There so weird lookin'!

Well, the teachers do take the rules pretty seriously and they make school a drag.

LUNCHABLES! MIX IT UP!

I guess you could include Sorata, Miyuki, Kasumi, Ko, and Kimyona.

Not some that I can think of.