Is a popular YouTuber with over with more than 700 Thousand Subscribers. He is in a relationship with Rijī Dowaiyā, another fellow YouTuber

Zoeru Chachiru is an OC created by PrincessAire, but adopted by Tsurime and now owned by Mars. He currently attends Akademi High School.

Zoeru has brown hair, with a red ombre on his bangs. He has blue eyes, and he usually wears his jacket, even if he's outside. The jacket is his YouTuber trademark.

Zoeru is a very protective person, which could be witnessed by how he always tries to stay by Rijī's side all the time. He is also a very humorous person, as his videos (As stated by his fans) will never be complete if he doesn't joke at least twice. He is also someone that is easy to work with during projects and collaborations in YouTube videos.

Zoeru is a Gamer. Zoeru will always be followed by her fans (Number of his fans are five), and if he is gonna be killed by the player, some of his fans will sacrifice themselves, and others will notify the teachers. If Zoeru isn't killed, he will warn the other students in the School's page, and the player will then receive a huge drop of -50 in their reputation, and his fans will always guard him, and be vigilant when you are near. People who have seen the warning will be reluctant to talk to the player at first. If he snaps (Done if she witnesses 4 murders or if she witnesses the murder of her girlfriend), he will try to apprehend the player for the sake of her fans (Or girlfriend), and he is strong, but not super strong that it's impossible to defeat him. If the player points a camera at him, he will strike a cool pose. 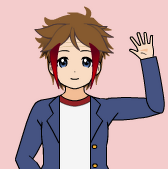